Gütersloh with a toddler 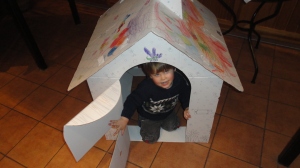 I never intended this to be a trilogy. But in the words of Fraulein Maria, I just can’t seem to stop saying things. So, if you’ve followed our adventures thus far you’ll know that we have arrived in Germany (misguided present tense there – we’re not still in Germany. I’m in my front room, vaguely watching “Supernatural”), in the garrison town of Gütersloh. So, if the VERY likely event that you have clicked onto a blog about London in the hope of toddler-based tips in the Westphalia region, you’re in luck! I’ll talk you through it.

The Germans seem to have some good ideas re toddler entertaining. We ate out every day we were there (all three days we were there) and everywhere seemed to have a kids menu and a play area. Granted we went to the same place twice, but as a survey on German eateries goes, the town scored highly. The place we went to twice was called Celonas, in the town centre.  It had a pretty standard nuggets-und-chips kids menu but also a lunchtime buffet that Roo happily grazed from on the first day (and it was kostenlos for the kind. Hooray!). It’s – I guess – Spanish themed menu but the buffet was pretty darn German. Not that I’m complaining, as currywurst is in my blood (not literally, that would be pretty gross). It had a play area, with play oven, blocks and books and downstairs there was a nice changing table with the pictured-above cardboard house next to it. There were quite some tears when we had to remove Roo from the house. It was ugly. The scene, not the house. They also had the same ikea lamp and toy box that we have from home. That helped us to settle in, having come straight from the station. (They have chips, they have blocks…he will later discover that they have Beebies. How much more  settling in did Roo need?!) A very relaxed way of eating, as Roo came to the table as and when he fancied food and just played happily the rest of the time. A definite recommendation. 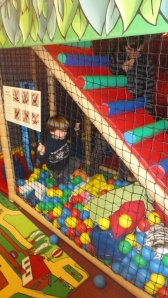 On the second day, we went to a garden centre. The Germans love their Gartencenters! On the drive to this specific garden centre, we passed at least four others. And very few spectacularly presented gardens… This particular garden centre (which I believe was called Gartencenter Gütersloh) had a free soft play area. On the whole, fairly similar to an English soft play, so Roo approved. He really didn’t get culture shock at all. The cafe was large, they were very accomodating towards toddlers and again they had a kids menu of the dinos-und-chips variety. Mit dip! I seemed to have some problems with the girl on the till, which I assumed at first was my German but on reflection she may have been new. When I went to buy more ketchup for 90 cents and handed over 1 Euro…only for her to try and give me back 2 Euros. That was my first clue. 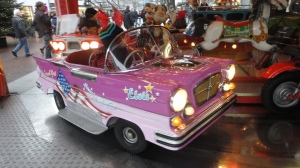 So, much fun was to be had in the Gartencenter. What else was there to do in Gütersloh? Well, there was a Christmas market (reminiscent of Winter Wonderland), with a carousel that Roo enjoyed (he chose a pink cadillac, adorned with pictures of Elvis), a German take on Punch and Judy and -on the last day – an empty stage full of Christmas trees, that I’m pretty sure Roo wasn’t meant to play on. But you try stopping an overexcited toddler yelling “‘Ismas tree! Ismas tree!!” and darting off among them. We ended up hauling him away in yet another ugly scene. So you like Germany then, Roo?! 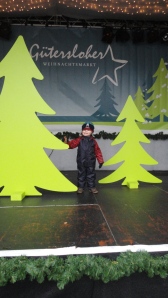 In a nutshell, then, that’s Gütersloh with a toddler. I know it may not be of immediate use to most people who read this blog but I hope you enjoyed it. And if you’re looking for somewhere to visit next Christmas, well there you go. Sorted! For a small fee, I can give you the contact details of the friends we stayed with…I’m sure they’d love to have you there too…

This entry was posted in Creating precious childhood memories or something (days out) and tagged cafes, carousel, Christmas, Germany, soft play. Bookmark the permalink.

3 Responses to Gütersloh with a toddler