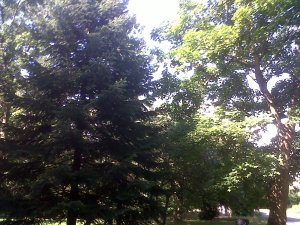 Well, one reason might be that you have an overtired 3-year-old and you’ve already been out for lunch in a Farringdon hotspot. Or you may be getting over a virus and really should go home and rest up. But I don’t listen to reason, and on the way back from Farringdon, with two sleeping children, in Elephant and Castle Shopping Centre…I made a decision. We would not go home. It was hot. We would go and discover the delights of Ruskin Park. Just get me out of this damn shopping centre. 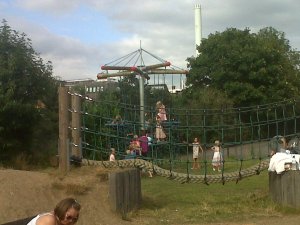 So, we went. When Roo woke up, still tired, disorientated and grouchy there was a certain amount of tension. There was a lack of enthusiasm. There was shouting. But I’m going to skip over the nasty bits – the flooded toilets, the only-fit-for-the-bin pants, the empty packet of wet wipes – and instead we’re going to imagine that I went there on a calm day, feeling on top of the world. With a similarly calm baby and a perfectly behaved toddler.We can dream.

What then would my perfectly behaved child think of this park? Well, it’s far bigger than you’d think from the road. I lived in Camberwell for 5 years and always thought it was a tiny scrap of park (this was before Google Maps), so never bothered going there. But it’s huge! It’s narrow on the road side, and not well signposted, but it goes a long way back. Looking at the aforementioned Google Maps, it’s probably about the same size as St James’ Park (now there’s an arbitrary pingback if ever I saw one) Big then. There are ponds and formal gardens, and a bandstand. Obviously my perfect child (let’s just call him FlawlessBoy) would be trusted in both formal gardens and near ponds. This child would never harass the ducks or pick the rare orchids. I’m liking him more and more.

Onto the main attraction – the paddling pool. It may be a bit grimy for FlawlessBoy’s tastes, but that’s OK cause he never complains about anything. It’s not sinister dirt, if that helps. Just that slightly algae-y stuff you get around water. The paddling pool is a good size, has fountains at the corners and lots of seating around, including some on a grassy area. The only criticism I would have is that the grassy bit is quite hard to get to because you have to negotiate the thin concrete bits between the fence and the pool to get there. Not easy with a hugely overladen buggy.  The huge boon as far as boys are concerned is the proximity to the train line. It’s right next to the paddling pool. Really. A thin wire fence separates your soggy toddler from the mainline into Victoria.

Lucky that FlawlessBoy is so sensible when it comes to danger.

If however, your toddler is not so sensible, you may feel a wave of paranoia coming over as he clings to the fence, looking for a way through to REALLY see the trains. This being sleepy South London, you can rest assured that no teenager will have vandalised the fence. No no. So, something to look out for. All boys will find it exhilarating. Let’s hope no boys ever find a way through. 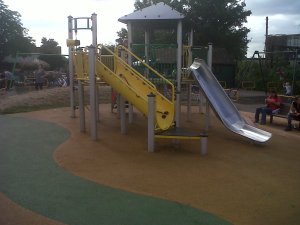 Moving on to the play park, FlawlessBoy dropped his trousers and performed on the potty when requested, so we had a lovely and stress-free time there (hey, dreaming here). The play park was pretty good – a climbing frame in the shape of a boat, lots of swings and a rope bridge that Roo managed to cross, despite two identically-dressed sisters trying to push him off. He was very brave about it, and polite. In fact, he handled it way better than that smug git FlawlessBoy.

Oh yeah, I’ve dumped FlawlessBoy and reverted to talking about my own child (henceforth known as “FlawedBoy”). FlawlessBoy was getting on my nerves, so shortly after he did his virtuoso performance on the potty, I lashed him to the climbing frame using the strawberry laces I’d packed for bribes, but hadn’t needed. He may still be there. Turns out that FlawedBoy aint so bad once he’s had some attention from a loving  and cheerful mother. It wasn’t his mother, obviously – it was my heavily-pregnant friend Louise. But she cheered him up and bought him an ice-cream and all was well in his world. We’re not mentioning the Incident that decimated our wet wipe supply.

Talking of ice-cream, there were two options here – a van parked just outside the paddling pool area, and the Ruskin Park cafe, which sold yummy-looking cornish ice-cream. By popular request, we went for the ice-cream van. The cafe also does hot food, I believe. There are giant straw parasols to eat under as well, which feels a bit like being on holiday.

It was getting very late, by our standards (5pm!!), so we hopped on the 185 and headed home. Roo didn’t wet himself on the bus and – as promised- held off until we got home. Take that, FlawlessBoy.

VERDICT: A nice one for a hot day. Remember to take swimmers and a towel (you just don’t have these things handy on spontaneous trips) and don’t count on being able to change anyone on the floor of the loos.