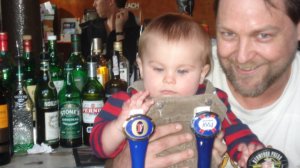 I never normally let anyone else tell me what to write. But my loyal host-ers WordPress, threw up this writing challenge and I couldn’t resist answering. After all, it’s kinda my area – taking toddlers out of the house and unleashing them onto the wider world, which occasionally involves those places designated as “adult-orientated”.

The actual question is this: “How do you feel about children in adult-oriented places?”

My first question for the question is, what do you mean by “adult-orientated” (sorry, I’m gonna persist in the anglicized version). Are you asking about whether or not to take your children to seedy alleyways in Soho, so they can look at sex shop facades? Is that a bad thing to do? Guess what Roo’s friend Micah said when she saw this, opposite our church centre in Soho: 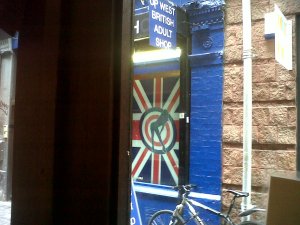 After which, they pointed at it and repeatedly chanted “Team GB! Team GB!”. I think the adult-orientation of the British Adult Shop went right over their heads. The Britishness didn’t.

But I suspect, that’s not what they mean by “adult”. I suspect they mean pubs, restaurants and onto the murky grey areas of art galleries and museums. I’ve been to a lot of these, with and without my children so I think I know what I think.

But before I get onto that, what do you mean by children? Would I take my 11-year-old niece to places I wouldn’t take my 3-year-old son? Well, yes. It’s a matter of discernment. When Roo was brand new, we used to take him anywhere and everywhere with us. Pubs (in the evening!), restaurants, the Turner Prize – everywhere. He was always welcome in our local, being as how he’d nearly been born there. Besides, he was either feeding or asleep. He went to restaurants with us and, again, he slept. He spent an entire birthday meal in a Turkish restaurant snoozing in his car seat under the table. It was only when he woke up that anyone noticed he was even there. For a little while there, we could pretend we still had some kind of social life. 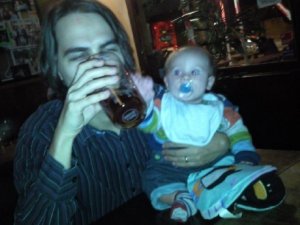 Then, around 5 months three things started to happen: 1) He lost the ability to sleep through anything, anywhere, 2) he started going to bed in the evenings and getting ratty if he missed his bedtime and 3) he started on solids. The combination of these three things (awake, upset and messy) meant that he wasn’t as welcome as he used to be. One evening, when we were at our local, the Landlord was out and some newbie barmaid was running things. Roo started crying, she chucked us out and the dream was over. Similarly, once he started chucking food about the place, we had to be a bit more selective about where to eat. Not that we ever ate anywhere fancy anyway. Luckily, London is just full of places to eat with a toddler.
I guess what I’m trying to say, is that “children” covers a huge scope – a newborn baby can go anywhere and do anything with you because they will mainly be asleep, an older baby is trickier, a toddler is a darn nightmare in most civilised “adult” situations but as soon as you get to the bribeable stage, there is light at the end of the tunnel. Even now, at the grand age of 3, Reuben is starting to be take-out-able again. Just look how well behaved he is when someone gives him an iPad and free access to Peppa Pig videos on youtube: 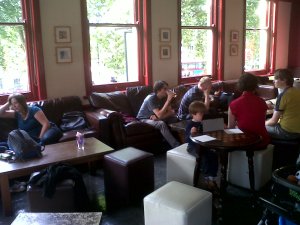 As you can tell from the photo, this is a (Sunday) lunch time trip to the pub, rather than a Friday night hard-drinking session. That’s the other thing to consider – it’s all about timing.  If your child is either a) reasonable, b) distractable or c) bribeable with chips and a J20, there’s no reason you shouldn’t taken them out for a Sunday roast. And it would be a very stupid publican who didn’t welcome them, especially in a local pub. If you refuse a large group of local people just because they have a child with them, then you might as well just take a large wad of notes and flush them down your inaccessible toilet. Especially if – as above – your pub has an upstairs room where the children can run around without bothering the grumpy old men.

I realise I’ve talked mainly about pubs here. That’s because I think they are one of the only true grey areas in the “where to take children” spectrum. Nightclubs? No, you don’t. Parks? Yes, you do.  How about museums? Well, some museums may be more entertaining for children than others, but I believe they are welcome in most. Some – like the V&A – have precious and delicate things behind toddler-height ropes. They require a bit more control. But most of the big ones – the Science Museum, Horniman, Natural History Museum and even the Tate Modern – have either kids’ areas or activities designed for kids. That’s a pretty clear indication that they welcome under-18s on their premises.

In other words, things have moved on since the 1950s. Museums are no longer dusty mausoleums. They are interactive, bright and friendly. My very simple rule of thumb is that if they have baby change facilities, it’s fine to take a baby there. That makes sense, no?

And don’t get me started on whether or not you can breastfeed in public spaces.

In answer, then to the original question I’m going to use a classic Danny Wallace answer and say “there are a lot of variables”. What kind of places? What age are these children? What time of day? But basically, as long as you have a certain amount of control of these children you’re dragging around with you then it should be fine. Common sense says if they’re being disruptive somewhere, you deal with that in some way (take them out or -more likely- bribe them to be quiet). Even commoner sense says to take them somewhere that’s child-friendly in the first place. I can think of 100 of these in London.  And you’d be surprised by just how child-friendly some of them are.

This entry was posted in What I suppose you'd call "tips"....? and tagged DPChallenge, London, pubs. Bookmark the permalink.