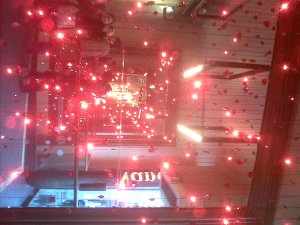 Yes, yes once again this sounds like madness. I’d considered myself lucky to escape from Primark alive a few days back. But when you’re in a Nandos in Berners St and you need to go shopping, Oxford St doesn’t seem like such a crazy idea.

Besides, it was Reuben’s idea. That probably does make it a crazy idea.

Nathan and Reuben had already tried to go shopping before church. Now, there’s no reason that Nathan should know what time Oxford St shops open on a Sunday. It’s not like I worked there for 2 and a half years, opening my shop at midday every week and complaining about all the stupid tourists who stood around and waited for me to open at ten. Anyway, I’ve let him tell it here, in his version of events

Our first stop was Urban Outfitters, in search of an ironic gift for a gay friend with a love of kitsch. First job done. Even if I was far too old and uncool to be in there. And definitely the only person carrying a baby. Someone else had a buggy, but no child in it. Probably sensible, in retrospect.

Next, we went on to Muji, in search of something for Eva (criteria: must be biteable). They had some super cute penguin-skittles but they were possibly too nice to be bitten, so we moved on. Onto M&S. And that’s where it all started to fall apart.

I had a vague shopping list in mind and thought M&S Gifts Department could help. But after a few circuits I fell into a kind of catatonia and just stood staring at giftsets of royal-jelly-with-back-scrubber and man-sized coffee mugs with “man” written on them (what is royal jelly anyway?!) and eventually picked up some things which may or may not be appropriate Christmas presents. I genuinely still have no idea. I do know I found a nice bitey-wooden stacky toy for Eva and a “Miaow miaow” book that matched her brother’s “Woof woof” book. Result. 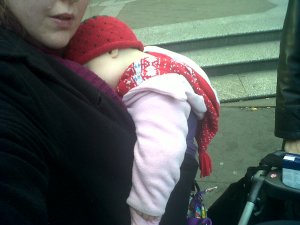 By this time, Eva had fallen into a state of catatonia too (or maybe she was asleep) and at some point my sister called me to sing an old worship song at me and ask me to identify it. I couldn’t identify it. It may or may not have been Graham Kendrick. Anyway, with Eva still asleep, we went to the till. And waited. There were two tills open, which was fine, but one was tied up with a credit-card authorisation issue. Then the other one got tied up with an arsey-customer-wanting-a-discount issue. We were waiting a while. Long enough for Eva to complete her sleep. By this point, I was regretting not having the buggy cause at least I’d have been able to put the kilo box of biscuits down somewhere. I hoped Nathan was having better luck.

I called him. He wasn’t.

We paid, and staggered around looking for the exit. Where was the exit? No, that’s just an escalator going down (we were in the basement). Then a sign; “Exit to Oxford St”. It’s normally a place I try to avoid but this time we ran towards it eagerly.

Then we blitzed H&M with the fevour of newly-released prisoners. Supplementary gifts for niece and grandmother – BAM! Accessories for Roo’s friends – BAM#2! Cute outfit for Eva – BAM#3, and then just another long queue stood between me and being able to offload this stuff onto my dear husband. As we walked out of the store the security barriers sounded but by then I didn’t care. No security guards came running after me so I just stood around nonchalantly. I spotted some friends from church and chatted to them for a few minutes before reading a text from Nathan to the effect that he was waiting for me inside. I wasn’t planning to set off the barriers again, so I just yelled at him. He turned round, a broken man. But he was a broken man with a sleeping child and *apparently* some kind of present for me. I had bulging bags of presents for all and sundry and aching biceps.

Missions successful? Read Nathan’s post and judge for yourself….

Note: Much like the companion piece to this, I have no photos to speak of. So you have an arty shot of Nandos at the beginning, then one of Eva asleep somewhere that is clearly not M&S Oxford St (it is, in fact outside Liverpool St). Just to help break things up a little yknow…

This entry was posted in Just wandering.... and tagged Central London, Christmas, shopping. Bookmark the permalink.