It’s New Year’s Day! It’s sunny! Both the kids slept in this morning (i.e. didn’t get up at 5)….do you need more reasons to be excited? Well, neither did I…and when I get excited, I get all spontaneous and silly. Remind me n0t to get excited too often.

So, today was a spontaneous kind of day. It started with a quest for coffee, which will be duly reported in the new blog.  Once Nathan was all caffeined-up, our friend Slinky suggested we join him in watching the New Year’s Day parade. Well, I don’t remember him actually suggesting that we join him. He more said that he was going and then we tagged along. At no time did he say “my enjoyment of this parade will be enhanced by the addition of a whingey baby and a feisty 3-year-old, along with their grumpy parents and a shedload of stuff”. With that in mind, we split off at Victoria Tower Gardens for lunch and a play while Slinky slinked off ahead to actually watch this parade thing.

Victoria Tower Gardens isn’t the most exciting park ever. It’s managed  by the Royal Parks, but it’s not on the scale of St James Park or Greenwich Park really. It’s just a small piece of green tacked onto the side of the Houses of Parliament. It has some monuments in it, including one which apparently looks like the inside of the Tardis, and a slide and swings. That’s it. This slide and some baby swings. As I said, not really on the scale of the other Royal Parks. Slinky’s class were involved in a consultation on the future of the gardens, so it seems like there might be more there in the future. It was Slinky’s class that discovered the inside-of-the-Tardis thing. And talking of the Tardis, look what we spotted just outside the Gardens: 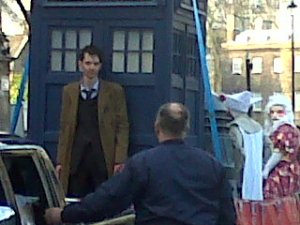 Not that’s not the real David Tennant. If only. Otherwise I may have run off with him, and this blog may have to be renamed “Barbados with a Timelord”. But through a fuzzy camera it’s close enough. The parade was already underway, so once we’d had our Tesco picnic and been showered in cheese and pickle (not as fun as I thought it’d be, but thanks anyway Eva) we wandered towards Parliament Square to catch some of the parade.

It was OK. Can’t say it was amazing, but maybe that was because we were at the end point and everyone looked a bit knackered and fed up. One woman in a bird headdress looked particularly hacked off. But it was interesting. There were people dressed as birds, a huge brass band, a smaller brass band mixed with hip-hop beats (bit bizarre) and a parade of Star Wars and other film characters.

Now, this was a missed opportunity. If you had a whole load of stormtroopers marching, wouldn’t someone have thought to secrete a small speaker in one of their helmets, blaring out the Imperial March? You know it…the one that goes DUM DUM DUM DUM DE DUM DUM DE DUM. That would have been cool and atmospheric. Having them just wander by was a bit lame really. Again, this might have been because we were right at the end. Once they’d walked past us, they all took off their helmets in classic “Stormtrooper on a lunch break” way. Chewbacca looked especially sweaty.

Not that Roo really noticed or cared. He was busy trying to get into the tent formerly owned by Brian Haw. I didn’t think that was a good idea (he might get arrested or drink all their milk), so kept trying to distract him – “look Roo, it’s a giant!”. He spent much of his time on his scooter, slowly moving across the mudbath that was Parliament Square. I’m guessing a week of rain, followed by New Year’s Eve crowds, hadn’t been kind to it. But it meant that Roo couldn’t scoot away very fast, which suited us just fine. When he was on the pavement on it, it was far too easy for him to escape and/or run over tourists. There weren’t huge crowds, but enough to lose him in.

By 2ish, it was time to go home. Due to the spontaneous nature of the whole outing, we didn’t have a buggy with us and Roo had scooted/walked a long way. So, he was quite quite tired. Not that you could tell with the manic way he was mud-scooting about. We had hopped a bus on the way there, but it was barely worth it given they were all stopping south of the river. It was worth it though, to test out the new “debit card as oyster” system. It works! If you have a contactless debit card, you can use it as an oyster card, at oyster prices. Handy if, like Nathan, you have no prepay on your oyster. So that was an interesting experiment but it realllly wasn’t worth another bus home. So Roo had to walk. We stopped briefly in Victoria Tower Gardens again, where Roo scared the birds away and then cried because he “wanted the bird to sit in my hand”. Tired indeed. So he sat down to look at the boats.

Then his mean parents made him walk again, so he kept saying “my legs are aching” and eventually sat down in the middle of Lambeth Bridge. We got home somehow, with some Daddy-carries and some scooting and quite a bit of incentivisation. Fortunately Eva was asleep. Guess that’s the price of spontaneity….

VERDICT: An interesting day out, if you don’t have to make too much effort. Could easily be a bit more exciting!