Riding the ducky boat – a trip with London Duck Tours

You may remember some time ago, in a long week of quarantine, the kids and I went on a “ducky-spotting” adventure –  we followed the ducky boat and watched it splash in at Vauxhall. Now, I showed this to the nice people at London Duck Tours and they said we could tag along and see what it was like from the inside.

I was excited. And Roo was excited. As soon as I told him we were going to the ducky boat after “The Lingo Show”, he leapt into action and put his wellies on and switched cBeebies off. We didn’t even watch Lingo. He was raring to go and so was I. Eva wasn’t quite so bothered.

Obviously, we got there a *little* early, so we left Roo’s scooter and the changing bag at the ducky shop and went to the café nearby “Enough to Feed an Elephant” for a second breakfast of apple juice and croissant. I like it in there because all the seats are old tube train seats, and they have the maps above them. Also, I knew they had a toilet and it was kinda essential for me and Roo to go before boarding (no loos on the ducky itself). How do I know they had a toilet? Well, my nephew Mikey got locked in there when they came to visit in 2008 and Nathan had to climb in and rescue him. That sticks in the memory. So, we breakfasted within sight of the ducky stop so we wouldn’t be late. And we also stopped outside the tourist tat shop for a quick photo opportunity: 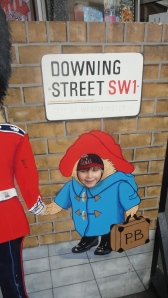 And then we were ready to board. We took our seats and Roo started counting down “3…2….1…GO!”. I pointed out that there was no driver yet, so we were unlikely to “blast off” but you know Roo – that doesn’t stop him. After a few minutes, we were joined by our lovely tourguide Ruth and lovely driver Eric and we were off:

Here’s Ruth in full flow. I have to say , she was an excellent guide. Lively without being overwhelming and full of interesting facts. I like to think I know London pretty well, but even I learnt something, like the aversion that pigeons have to the statue of Churchill. The tour started with a half-hour ish drive over Westminster Bridge, Whitehall, Trafalgar Square, Pall Mall and back towards Westminster via Buckingham Palace. Around the tour, she pointed out famous places and more obscure ones like Prince Charles’ favourite shoe shop. I thought it might be a bit much for Roo, especially as he’s seen all these sights so many times but no, he seemed to be enjoying himself looking out of the window and savouring the novelty of being in a giant yellow ducky-car rather than a small red Vauxhall Astra car. 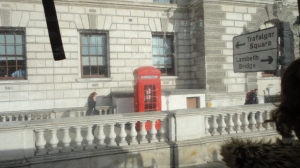 Eva wasn’t enjoying herself so much. She started a low level tired grizzle around Whitehall, which turned into a full-on wail by Pall Mall. I tried offering her a breadstick but she was having none of it. I was reluctant to feed her due to all the many layers I was wearing, but around the back of Buckingham Palace I gave in. Sorry Ma’am. She gave me two sharp bites to express her displeasure at being kept waiting and then settled down to feed. Pretty soon, she was out:

The paucity of photos I have altogether is probably due to the fact that she was lying on one arm and I was using my other arm to hang on to Roo, who occasionally showed signs of wanting to climb out of the window. Luckily he didn’t. But he was getting a little impatient to get to the main event as we went up Millbank. He didn’t have long to wait. We crossed Vauxhall Bridge, swapped Eric for a Thames waterman called Danny and braced ourselves. It was almost splashdown time!

I’ve got to admit, it was a little scary. Roo was not the only person saying “aaaaarrrggghhh”. It goes so low in the water and makes so much noise that you do wonder whether it’s going to stay afloat. But the duck tour have been running for a long time and they haven’t lost anyone yet, as far as I know.

My other concern was just how cold we were going to be, hence all the extra layers. When I checked the weather report a few days ago, there was the possibility of snow. But it turned out to be a glorious day to be on the river – blue skies, sunshine and calm waters. Even with one of the windows open, we were snuggly warm.

We cruised as far as Westminster Bridge and then turned round. Roo was holding my arm for security all the way, but was gazing at the water in stunned silence. I’ve never known him this quiet. The river section was about the right length for him as he might have started getting restless, but as it was he seemed to love it. I think he felt like a real Octonaut.

And then we were almost back home. By that, I mean the duck tour stop. We’d passed our actual home three times on the way. We thanked Ruth profusely for her boundless enthusiasm and went back to the cafe to eat some chips and cucumber before nursery 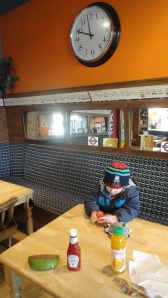 (Then it all went wrong and we got to nursery late, having been to hospital and stopped by the postman on the way. But that’s another story.)

(The hospital trip was just to use the loos. Don’t worry Mum)

VERDICT: A fun trip out for a morning. Eva was obviously the wrong age for it, but Reuben enjoyed himself and kept talking about it in the cafe afterwards (“we went on an a-venture in a ducky boat and we made a splash!”). It’s a quirky way to see London and even seasoned Londoners can enjoy it. You may feel a little self-conscious going round town in a giant yellow ducky car, but you soon get over that. Even when tourists are taking photos of you.  I would definitely recommend it, as long as you find some way of sedating the over-tired baby.

Disclaimer: We received complimentary tickets from London Duck Tours in order to write this review. All opinions remain honest and my own.

This entry was posted in Creating precious childhood memories or something (days out) and tagged boats, Central London, ducks, playing tourist. Bookmark the permalink.