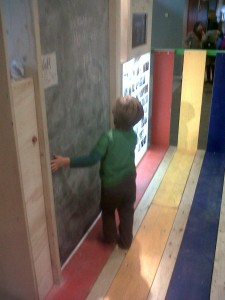 Yes, I know this is out of sequence with the Tree Fu Tom post, but that’s where live-blogging gets you. I’ve also had a busy week writing lots of random things so this one is a bit later than it should have been.

So, we visited the Imagine Festival yesterday. Not entirely intentionally, but I was meeting some people from the BLW forum and the Royal Festival Hall is a handy place to meet. I may have mentioned already that all the stuff I wanted to go to was sold out, so we were kinda going despite the Festival rather than because of it.

It was, obviously, mega-crowded, much like the Horniman was on Wednesday. Oxford St today came as a blessed relief in comparison. The Clore Ballroom was sealed off for some performances, so we sat around the side and managed to bag a table. Most of us had babies, so we actually spent most of the time on the floor rather than the table itself.

Actually, I spent most of the time chasing Reuben around. Shocker, hey? There were many brightly coloured things he wanted to explore so he just kept running off. I caught him once, just as he was about to hit the fire alarm. Another time he ducked and dived and ended up at Festival Control:

Festival control is pretty sweet. The Imagine festival is organised partly by local children and they have their own HQ set up throughout the festival. It’s suitably brightly coloured, with a library of kids’ books and a marshmallow dispensing machine. Every half hour or so they offer tours of their “offices”, which include a ballpool in a cupboard. We didn’t actually go on the tour, but Roo snuck in behind their back, which is how I know about the ballpool. Once I hauled him out, we sat and read some of the books on the porch area outside.

Obviously, the queue at the cafe was pretty scary. They had some cute , kid-size tables and chairs set up but they were all taken all the time. Once we’d got some food, we went back to our table and saw some sights on the way. Like a giant lego book: 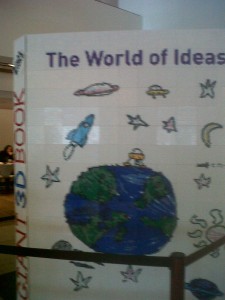 Which was veeerrrry tempting for little 3-year-old fingers. We moved hastily on, past a tribute to Stockwell bus garage: 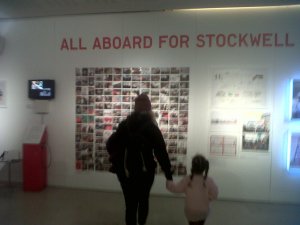 And some kind of paper-tree: 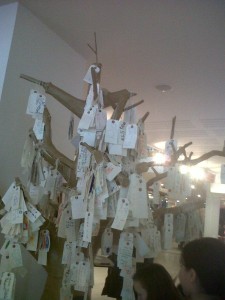 There was lots to see, and a fair bit to do. While we were there, they had a “learn to sing” workshop going on in the Clore Ballroom with a kids choir and the theme was musicals. That’s good – I like musicals. I watched one that my lovely husband bought me just the other day. It was “Singing in the Rain”, featuring the song “Good Morning” which I liked a reasonable amount.

The kids choir and peppy teacher started teaching the assembled children a song. It was “Good Morning” from “Singing in the Rain”. What a co-incidence! I like that song a reasonable amount. Enough to listen to children learning it line by line? Hmm, maybe not. This could get tedious quite quickly.

It got tedious, quite quickly. My fellow BLWers and I were feeling the same. After an hour or so, I realised that I could go the rest of my life happily without ever hearing that song. Roo wanted to go in the noisy lift, so we ducked down to the Spirit Level, where we found a DIY UV coral reef. You could cut fish out and stick them on walls lit with UV light, and it stretched the length of the Clore ballroom. It was pretty cool. I liked that someone had written out the words to “Octopus’ Garden” on it:

Back upstairs, Roo was getting restless and the babies were getting tired. And the peppy lady was starting “How to sing jazz”.

Don’t say I don’t know when to make an exit.